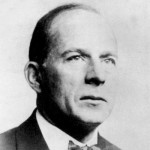 Garet Garrett was born in Pana, Illinois, United States. He was an American journalist and author, who is noted for his opposition to the New Deal and U.S. involvement in the Second World War. He had a financial columnist for the New York Evening Post in 1910. In 1913, he became editor of The New York Times Annalist, a new financial weekly, and, in 1915, he joined the editorial council of the New York Times. In 1916, at 38, he became the executive editor of the New York Tribune. In 1922, he became the principal writer on economic issues for the Saturday Evening Post, a position he held until 1942. He wrote several books include: Where the money grows, The blue wound, The Driver(novel), The cinder buggy, Harangue, A bubble that broke the world, The wild wheel, and The People's Pottage.