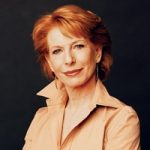 Gail Sheehy was born in Mamaroneck, New York, USA. She is an American author and journalist. She is the author of seventeen books, including Passages, named by the Library of Congress one of the ten most influential books of our times. She has written biographies and character studies of major twentieth-century leaders, including Hillary Clinton, both presidents Bush, Prime Minister Margaret Thatcher, Egyptian President Anwar Sadat, and Soviet president Mikhail Gorbachev. Her latest book, Daring: My Passages, is a memoir. In 1958, she graduated from the University of Vermont with a Bachelor of Arts in English and Home Economics. In 1970, Sheehy earned her Master of Arts in Journalism from Columbia University. She began working as a journalist for the Rochester publication, Democrat and Chronicle from 1961 to 1963, then for the New York Herald Tribune from 1963 to 1966, and then as a contributor to New York from 1968 to 1977. She has been a contributing editor to Vanity Fair magazine since 1984.