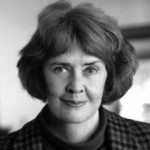 Gail Godwin was born in Birmingham, Alabama, USA. She is an American novelist. She obtained a Bachelor's degree in journalism from the University of North Carolina at Chapel Hill. After graduating, she worked briefly as a reporter for The Miami Herald. She taught English at the University of Iowa, while earning her M.A. in 1968 and Ph.D. in English Literature in 1971. Her primary literary accomplishments are her novels, which have included five best-sellers and three finalists for the National Book Award. She has written several novels include: Father Melancholy's Daughter, The Good Husband, Queen of the underworld, The Perfectionists, Flora, The Odd Woman, Violet Clay, A mother and two daughters, The finishing school, A Southern Family, Evensong, Evenings at five, and Glass People.