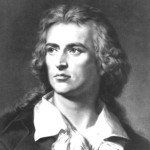 Johann Christoph Friedrich von Schiller was born in Marbach am Neckar, Württemberg, Germany. He was a German poet, philosopher, physician, historian, and playwright. In 1780, he obtained a post as regimental doctor in Stuttgart. In 1789, he was appointed professor of History and Philosophy in Jena.   He wrote several books include: Ode to Joy, On the Aesthetic Education of Man, Die Bürgschaft, The Ghost-Seer(novel), The poems of Schille, The History of the Thirty Years' Warr, and Song of the Bell. He wrote several plays include: The Robbers, Fiesco, Intrigue and Love, Wallenstein, Mary Stuart, The Maid of Orleans, The Bride of Messina, William Tell, and Demetrius.