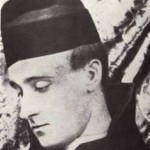 Frederick William Rolfe, better known as Baron Corvo, was born in Cheapside, London, England. He was an English writer, painter, photographer, and novelist. He wrote several novels include: Hadrian the Seventh, Don Tarquinio, Don Renato, The Weird of the Wanderer, and Hubert’s Arthur. He wrote shorter fiction include: Three Tales of Venice, Amico di Sandro, The Cardinal Prefect of Propaganda, and The Armed Hands. His principal works of fiction include: Stories Toto Told Me, Nicholas Crabbe, and The Desire and Pursuit of the Whole. He took an interest in photography throughout his life, but never achieved any more than basic competence. His photographic career has been fully documented in Donald Rosenthal's book The Photographs of Frederick Rolfe Baron Corvo 1860–1913. His paintings and designs, including several for the covers of his own books, were bold and surprisingly accomplished amateur efforts.