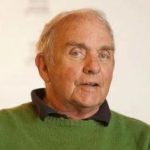 Carl Frederick Buechner was born in New York City, USA. He is an American ordained Presbyterian minister, novelist, theologian, and the author of more than thirty published books. His work encompasses different genres, including fiction, autobiography, essays, and sermons. He is best known for his works A Long Day's Dying. He has written several novels include:  Godric, On the road with the archangel, and The Book of Bebb. His autobiographical works including The Sacred Journey, Now and Then, and Telling Secrets. He has written several books include: Listening to your life, Telling the truth, Secrets in the dark, Wishful thinking, Beyond Words, The hungering dark, Brendan, Whistling in the dark, and The Son of Laughter.