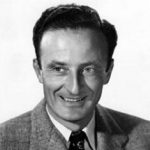 Alfred "Fred" Zinnemann was born in Vienna, Austria. He was an Austrian-born American film director. He won four Academy Awards for directing films in many genres, including thrillers, westerns, film noir and play adaptations. He won four Academy Awards and directed movies like High Noon, From Here to Eternity and A Man for All Seasons. He directed several films include: The Nun's Story, Julia, The Day of the Jackal, The Men, The Search, The Sundowners, The Seventh Cross, Oklahoma!, Behold a Pale Horse, Five Days One Summer, A Hatful of Rain, Eyes in the Night, That Mothers Might Live, My Brother Talks to Horses, and Teresa. He graduated with a law degree from the University of Vienna in 1927.