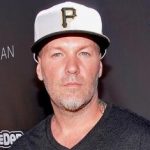 William Frederick "Fred" Durst was born in Jacksonville, Florida, United States. He is an American actor, businessman, film director, guitarist, singer, and songwriter. He is best known as the vocalist of the nu metal band Limp Bizkit, formed in 1994, with whom he has released six studio albums. He made his directorial debut in 2007, with the film The Education of Charlie Banks. He directed a second film, The Longshots, in 2008. His role in several films include: Population 436 and Play Dead. His albums list shown below: Gold Cobra, Stampede of the Disco Elephants, Significant Other, Three Dollar Bill, Y'all, Mental Aquaducts, Significant Demos in Hell, and Rock im Park 2001.