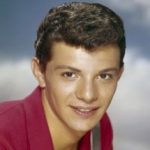 Frankie Avalon was born in Philadelphia, Pennsylvania, USA. He is an American actor, singer, and former teen idol. His role in several films include: Jamboree, The Alamo, Operation Bikini, Beach Party, Beach Blanket Bingo, Bikini Beach, The Castilian, Drums of Africa, Sergeant Deadhead, Fireball 500, The Million Eyes of Sumuru, Skidoo, and Back to the Beach. His albums list shown below: Frankie Avalon, Swingin' on a Rainbow, The Young Frankie Avalon, Summer Scene, A Whole Lotta Frankie, and Italiano. His singles list shown below: Beauty School Drop-Out, Just Ask Your Heart, A Boy Without a Girl, Swingin' on a Rainbow, Trumpet Sorrento, Young And In Love, and Beach Party.