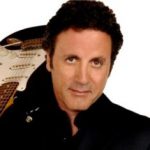 Frank P. Stallone, Jr. was born in New York City, New York, USA. He is an American actor and singer. He has worked as a singer in the tradition of American big band jazz and popular music, in a vocal style reminiscent of his idol Frank Sinatra. His albums list shown below: Day In Day Out, Close Your Eyes, Soft and Low, Full Circle, Frankie and Billy, In Love In Vain, and Let Me Be Frank With You. His role in several films include: Fred Claus, Tombstone, Return of the Roller Blade Seven, Hudson Hawk, Ten Little Indians, Heart of Midnight, The Pink Chiquitas, Staying Alive, and Paradise Alley. His singles list shown below: "Case of You", "Far from Over", "Moody Girl", "Darlin'", and "If We Ever Get Back".