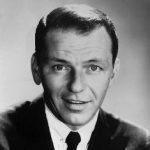 Francis Albert "Frank" Sinatra was born in Hoboken, New Jersey, USA. He was an American singer and actor who was one of the most popular and influential musical artists of the 20th century. Sinatra's music has been considered timeless by many. He is one of the best-selling music artists of all time, having sold more than 150 million records worldwide. His albums list shown below: The Voice of Frank Sinatra, Strangers in the Night, Duets, In the Wee Small Hours, Ol' Blue Eyes Is Back, Watertown, Nice 'n' Easy, Come Fly with Me, Only the Lonely, and Songs for Swingin' Lovers!. His career was reborn in 1953 with the success of From Here to Eternity and his subsequent Academy Award for Best Supporting Actor. His role in several films include: The Man with the Golden Arm, The Manchurian Candidate, On the Town, Guys and Dolls, High Society, Pal Joey, and Tony Rome. He was awarded the Presidential Medal of Freedom by Ronald Reagan in 1985. He was also the recipient of eleven Grammy Awards.