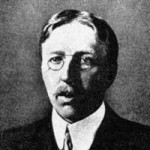 Ford Madox Ford was born in Merton, Surrey, England. He was an English novelist, poet, publisher, and editor whose journals, The English Review and The Transatlantic Review, were instrumental in the development of early 20th-century English literature. He is now remembered for his publications The Good Soldier, the Parade's End tetralogy and The Fifth Queen trilogy. He wrote several novels include: The Good Soldier, Parade's End, No More Parades, The Last Post, A Man Could Stand Up, Ladies Whose Bright Eyes, War prose, and The Young Lovell. He collaborated with Joseph Conrad on three novels including The Inheritors, Romance, and The Nature of a Crime.