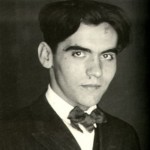 Federico Garcia Lorca was born in Fuente Vaqueros, Granada, Spain. He was a Spanish poet, playwright and theatre director. He achieved international recognition as an emblematic member of the Generation of '27. He was executed by Nationalist forces at the beginning of the Spanish Civil War. He studied at the University of Granada. During this time his studies included law, literature and composition. He wrote several poetry include: Impresiones y Paisajes, Libro de poemas, Poema del cante jondo, Seis poemas gallegos, and Sonetos del amor oscuro. He wrote several plays include: The Butterfly's Evil Spell, The Billy-Club Puppets, Mariana Pineda, The Shoemaker's Prodigious Wife, The Love of Don Perlimplín and Belisa in the Garden, The Public, When Five Years Pass, Yerma, and The House of Bernarda Alba.