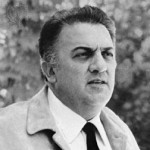 Federico Fellini was born in Rimini, Italy. He was an Italian film director and screenwriter. Known for his distinct style that blends fantasy and baroque images with earthiness, he is recognized as one of the most influential filmmakers of all time. In a career spanning almost fifty years, he won the Palme d'Or for La Dolce Vita, was nominated for twelve Academy Awards, and directed four motion pictures that won Oscars in the category of Best Foreign Language Film. In 1993, he was awarded an honorary Oscar for Lifetime Achievement at the 65th Annual Academy Awards in Los Angeles. He was directed and written several films include: I Vitelloni, Love in the City, La Strada, Nights of Cabiria, La Dolce Vita, 8½, Juliet of the Spirits, Fellini Satyricon, The Clowns, Fellini's Casanova, Amarcord, Intervista, and The Voice of the Moon.