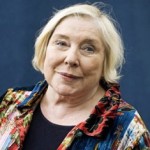 Fay Weldon was born in Alvechurch, Worcestershire, England. She is an English novelist, short story writer, and professor, whose work has been associated with feminism. She studied psychology and economics at the University of St Andrews, Scotland. She has written several novels include: The Life and Loves of a She-Devil, The Bulgari Connection, Chalcot Crescent, The Cloning of Joanna May, Puffball, Down among the women, Darcy's utopia, Remember Me, The Spa, and Words of Advice. In 1996, she was a member of the jury at the 46th Berlin International Film Festival. She was also chair of judges for the 1983 Booker Prize. In 2006, she was appointed Professor of Creative Writing at Brunel University. In 2012, she was appointed Professor of Creative Writing at Bath Spa University.