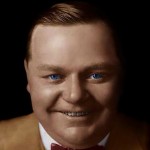 Roscoe Conkling "Fatty" Arbuckle was born in Smith Center, Kansas, USA. He was an American silent film actor, comedian, film director, and screenwriter. He mentored Charlie Chaplin and discovered Buster Keaton and Bob Hope. He was one of the most popular silent stars of the 1910s, and soon became one of the highest paid actors in Hollywood, signing a contract in 1920 with Paramount Pictures for US$1 million. His role in several films include: The Gangsters, Mabel's New Hero, His Sister's Kids, A Flirt's Mistake, Tango Tangles, and Wished on Mabel. He was directed several films include: Special Delivery, Stupid, Stupid, But Brave, The Iron Mule, His Private Life, Fool's Luck, and My Stars.