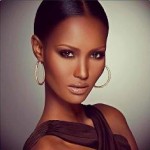 Fatima Siad was born in Mogadishu, Somalia. She is a Somali-American fashion model. Raised in Boston, Massachusetts, she placed third on America's Next Top Model, Cycle 10. She studied at Bryn Mawr College and New York University. She is currently signed with IMG Models in New York City, Paris, Milan, and London, and Ace Models in Athens, Greece, as well as with Munich Models In Munich, Germany. She has appeared in editorials for American and Spanish Vogue, American Elle, Australian and Indonesian Harper's Bazaar, Marie Claire, and Cosmopolitan. She has also appeared in Cosmogirl, Ebony, Essence, Women's Wear Daily, Flaunt magazine, and Look Magazine UK.