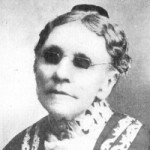 Frances Jane van Alstyne, more commonly known as Fanny Crosby was born in Brewster, New York, USA. She was an American lyricist and poet. A lifelong Methodist, she was one of the most prolific hymnists in history, writing over 8,000 hymns and gospel songs, with over 100 million copies printed. This is despite her being blind from shortly after birth. By the end of the 19th century, she was "a household name". Known as the "Queen of Gospel Song Writers", and as the "Mother of modern congregational singing in America". Some of Crosby's best-known songs include "Pass Me Not, O Gentle Saviour", "Blessed Assurance", "Jesus Is Tenderly Calling You Home", "Praise Him, Praise Him", "Rescue the Perishing", and "To God Be the Glory". She wrote over 1,000 secular poems, and had four books of poetry published, as well as two best-selling autobiographies.