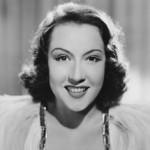 Ethel Merman was born in Astoria, Queens, New York City, USA. She was an American actress and singer. Among the many standards introduced by Merman in Broadway musicals are "I Got Rhythm"; "Everything's Coming Up Roses", "Some People", and "Rose's Turn"; and the Cole Porter songs "It's De-Lovely", "Friendship", and "I Get a Kick Out of You", "You're the Top", and "Anything Goes". Her role in several films include: It's a Mad, Mad, Mad, Mad World, There's No Business Like Show Business, Call Me Madam, Kid Millions, We're Not Dressing, Alexander's Ragtime Band, Anything Goes, The Art of Love, and The Big Broadcast of 1936.