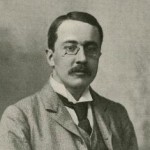 Ernest William Hornung was born in Marton, Middlesbrough, England. He was an English novelist, poet, and short story writer known for writing the A. J. Raffles series of stories about a gentleman thief in late 19th-century London. He published two collections of poetry during the war. He wrote several novels include: A Bride from the Bush, Tiny Luttrell, My Lord Duke, Dead Men Tell No Tales, At large, Denis Dent, No Hero, Stingaree, Mr. Justice Raffles, and The Camera Fiend. He wrote several short stories include: Under Two Skies, Some persons unknown, The Amateur Cracksman, The Black Mask, A Thief in the Night, and The Crime Doctor.