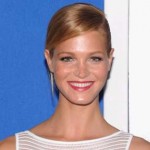 Erin Heatherton was born in Skokie, Illinois, USA. She is an American fashion model. She is best known for her work for lingerie retailer Victoria's Secret. At the age of 17 she moved to New York City and signed with the Marilyn Agency. In September 2006 she launched her career in New York City, walking for Diane von Fürstenberg. At the age of 17, she booked her first cover with Italian Flair. She has since appeared on the covers of D, Grazia, Velvet, Elle Czech, Elle Russia, Elle France, Elle Serbia, GQ Spain, GQ Germany, Beauty in Vogue, Rush, Flair Austria, and Muse. She is a featured supermodel on the Victoria's Secret website. In 2013 it was announced that she left Marilyn agency to sign with IMG.