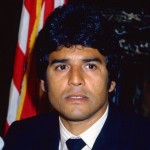 Henry Enrique "Erik" Estrada was born in East Harlem, Manhattan, New York City, New York, USA. He is an American actor, voice actor, and police officer known for his co-starring lead role in the police drama television series CHiPs, which ran from 1977 to 1983. He as a regular voice on the Adult Swim series Sealab 2021. In the 1970 film version of The Cross and the Switchblade, he made his film debut in the role of Nicky Cruz alongside Pat Boone, who played the role of David Wilkerson. In 1972, he co-starred with George C. Scott and Stacy Keach as LAPD Officer Sergio Duran in the movie The New Centurions. In 1974, he took part in the disaster film, Airport 1975, where he played a role as the flight engineer on a Boeing 747. In 2001, he landed a role on the daytime drama, The Bold and the Beautiful. He also starred in the short-lived CBS reality show, Armed & Famous. In 2008, he appeared in Husband for Hire, a television movie starring Nadine Velazquez and Mario López.