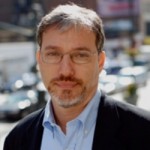 Eric Alterman was born in Queens, New York City, New York, USA. He is an American historian, columnist, author, media critic, and professor. He is currently CUNY Distinguished Professor of English and Journalism at Brooklyn College, the media columnist for The Nation. He began his journalism career in 1983, freelancing originally for The Nation, The Washington Monthly, The New Republic, Harper's, Le Monde diplomatique, and later, Vanity Fair, The New York Times Magazine, The New Yorker and The Atlantic Monthly. He published his first book, Sound & Fury: The Making of the Punditocracy, which won the 1992 George Orwell Award. He has written several books include: Who Speaks for America?, What Liberal Media?, The Book on Bush, When presidents Lie, Why We're Liberals, and Kabuki Democracy. He earned a B.A. in history and government from Cornell University, an M.A. in international relations from Yale University, and a Ph.D. in U.S. history from Stanford University.