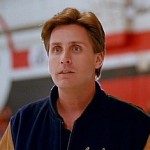 Emilio Estevez was born in Staten Island, New York, USA. He is an American actor, director, producer, and screenwriter. He started his career as an actor and is well known for being a member of the acting Brat Pack of the 1980s, starring in The Breakfast Club, St. Elmo's Fire, and also acting in the 1983 hit movie The Outsiders. He is also known for Repo Man, The Mighty Ducks and its sequels, Stakeout, Maximum Overdrive, Bobby, and his performances in Western films such as Young Guns and its sequel. Most recently, he has directed episodes of the television series Cold Case, Close to Home, The Guardian, CSI: NY and Numb3rs. The films he has directed include Men at Work and The War at Home. He directed the 2006 film Bobby, which took over six years to write.