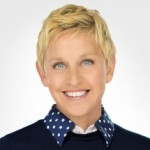 Ellen Lee DeGeneres was born in Metairie, Louisiana, USA. She is an American comedian, television host, and actress. She starred in the popular sitcom Ellen from 1994 to 1998, and has hosted her syndicated TV talk show, The Ellen DeGeneres Show, since 2003. Her stand-up career started in the early 1980s, culminating in a 1986 appearance on The Tonight Show Starring Johnny Carson. She starred in Mr. Wrong, appeared in EDtv, and The Love Letter, and provided the voice of Dory in the Pixar animated film Finding Nemo, for which she was awarded the Saturn Award for Best Supporting Actress, the first time an actress won a Saturn Award for a voice performance. She starred in two television sitcoms, Ellen from 1994 to 1998, and The Ellen Show from 2001 to 2002. She has hosted the Academy Awards, Grammy Awards, and the Primetime Emmys.