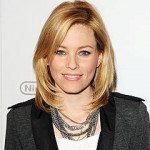 Elizabeth Banks was born in Pittsfield, Massachusetts, USA. She is an American actress, producer, and director. She made her film debut in the low-budget independent film Surrender Dorothy, and is known for her roles in such films as Wet Hot American Summer, seabiscuit, The 40-Year-Old Virgin, Zack and Miri Make a Porno, Role Models, The Next Three Days, Pitch Perfect, The Lego Movie, and The Hunger Games films. She made her directorial debut with Pitch Perfect 2, whose May 15–17 $69M opening weekend gross set a record for a first-time director. On television, she had a recurring role as Avery Jessup on the NBC sitcom 30 Rock, which gained her two Emmy Award nominations.