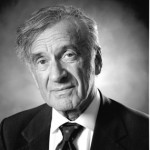 Eliezer "Elie" Wiesel was born in Sighet, Maramureș, Kingdom of Romania. He is a Romanian-born American novelist, professor, political activist, and Nobel Laureate. He won the Nobel Peace Prize in 1986, and later founded the Elie Wiesel Foundation for Humanity with his wife Marion Wiesel. He has a revered international activist, orator and figure of peace over the years, speaking out against injustices perpetrated in an array of countries, including South Africa, Bosnia, Cambodia and Rwanda. He is the author of 57 books, including Night, a work based on his experiences as a prisoner in the Auschwitz, Buna, and Buchenwald concentration camps. He went on to write dozens of books, including the novels Town of Luck, The Gates of the Forest and The Oath, and such nonfiction works as Souls on Fire: Portraits and Legends of Hasidic Masters and the memoir All Rivers Run to the Sea. He appointed in the mid-1970s as Boston University's Andrew W. Mellon Professor in the Humanities. He has also taught Judaic studies at the City University of New York, and served as a visiting scholar at Yale.