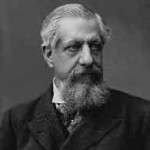 Sir Edwin Arnold was born in Gravesend, Gravesham, Kent, England. He was an English poet, editor, and journalist, who is most known for his work, The Light of Asia. He was educated at King's School, Rochester; King's College London; and University College, Oxford, where he won the Newdigate prize for poetry in 1852. In 1861 he worked as a journalist on the staff of the Daily Telegraph, a newspaper with which he continued to be associated as editor for more than forty years, and of which he later became editor-in-chief. Arnold's other principal volumes of poetry were Indian Song of Songs, Pearls of the Faith, The Song Celestial, With Sadi in the Garden, Potiphar's Wife, and "Indian Poetry".