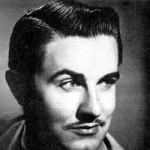 Edward Davis "Ed" Wood, Jr. was born in Poughkeepsie, New York. He was an American film director, actor, screenwriter, and novelist. In the 1960s and 1970s, he made sexploitation movies and wrote over 80 pulp crime, horror and sex novels. In 1948, Wood wrote, produced, directed, and starred in Casual Company, a play derived from his unpublished novel, which was based on his service in the United States Marine Corps. In 1980, he was posthumously awarded a Golden Turkey Award as Worst Director of All Time, renewing public interest in his work. Adult rated spoofs of his earlier movies, such as "Plan 69 from Outer Space" and "Glen and Glenda" were based upon his screenplays.