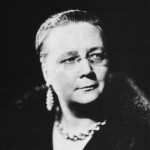 Dorothy Leigh Sayers was born in Oxford, UK. She was a renowned English crime writer, poet, playwright, essayist, translator, and novelist. In 1923 she published her first novel, Whose Body, which introduced Lord Peter Wimsey, her hero for fourteen volumes of novels and short stories. She also wrote four other novels in collaboration and two serial stories for broadcasting. She had already been asked to write a play, The Zeal of Thy House, for the Canterbury Festival. She followed this with six more, up to the Colchester Festival play, The Emperor Constantine in 1951. Sayers' first book of poetry was published in 1916. Her second book of poems, "Catholic Tales and Christian Songs", was published in 1918. In The Nine Tailors, one of her most well-known detective novels, the plot unfolds largely in and around an old church dating back to the Middle Ages.