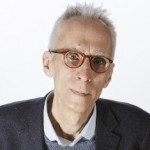 David Ives was born in Chicago, Illinois. He is an American playwright, screenwriter and writer. He is best known for writing comic one-act plays, a reputation which resulted in the New York Times referring to him as the "maestro of the short form". He has also written dramatic plays, narrative stories, and screenplays. He graduated with a Bachelor of Arts degree in 1971. He graduated from the Yale School of Drama with a Master of Fine Arts in 1984. Ives' first play in New York was Canvas. In 1987 his short play Words, Words, Words was presented at the Manhattan Punch Line Theatre. A two-act play, Ancient History was produced Off-Broadway in 1989 by Primary Stages. Ives’ full-length play, Don Juan in Chicago, premiered off-Broadway in New York at Primary Stages, March 25, 1995. He took several years to write The Phobia Clinic, a full-length narrative verse novel. It was published in 2010. He wrote a young adult book, Monsieur Eek, which was released in 2001. His book Voss: How I Come to America and Am Hero, Mostly, was released in 2008.