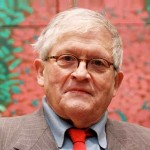 David Hockney was born in Bradford, England. He is an English painter, stage designer and photographer. An important contributor to the Pop art movement of the 1960s, he is considered one of the most influential British artists of the 20th century. He was educated at Wellington Primary School, Bradford Grammar School, Bradford College of Art and the Royal College of Art in London. He made prints, portraits of friends, and stage designs for the Royal Court Theatre, Glyndebourne, La Scala and the Metropolitan Opera in New York City. He began to work more with photography after this discovery and stopped painting for a while to exclusively pursue this new technique. In 1994, he designed costumes and scenery for twelve opera arias for the TV broadcast of Plácido Domingo's Operalia in Mexico City. In October 2006, the National Portrait Gallery in London organized one of the largest ever displays of Hockney's portraiture work, including 150 paintings, drawings, prints, sketchbooks, and photocollages from over five decades.