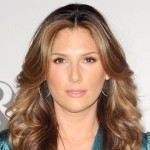 Fuentes was born in Havana, Cuba to a Cuban father and Spanish mother. she moved with her family to Harrison, New Jersey, where she attended Harrison High School, was voted Homecoming Queen, and "BEST LOOKING", and graduated class of '84. Fuentes started modeling during her senior year in high school. An aspiring hairstylist, she enrolled in cosmetology school with dreams of opening her own salon. While studying communications at Bergen Community College, she was hired as the weather-girl for WNJU-TV, the Telemundo New York affiliate station. Shortly after, she moved on to New York's Univision affiliate where she became the weather anchor and reporter for the evening news.
Daisy Fuentes was married to Juan Canales and was first hired in 1988 as the host of MTV Internacional, a one-hour Spanish-language music show that aired in Latin America and the U.S. Later, Fuentes joined MTV in 1993, becoming MTV's first Latina VJ. She was also a host of the fashion and modeling series House of Style, among other correspondent gigs. With MTV she achieved name recognition as one of that network's more popular hosts and soon was courted by companies to be a spokesmodel. She later landed a role on the ABC soap opera Loving. Fuentes appeared on shows such as Dream On, The Larry Sanders Show, and Cybill. From 1994 to 1995, she hosted her own talk show, Daisy, on CNBC.
She was the host of America's Funniest Home Videos from 1998 to 1999. She hosted The ALMA Awards, Dick Clark's New Year's Rockin' Eve, the 1998 World Music Awards, the 1999 Billboard Latin Awards, and the Miss Teen USA, Miss USA, and Miss Universe pageants. She guest-starred in the TV series Queen of Swords episode "Running Wild" 2000. In 2000 she also starred as Kenzie Pearson in Shutterspeed, a made-for TV movie also starring professional wrestler Sting.