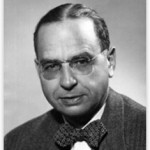 Elton Trueblood was born in Iowa, the fourth of five children, and graduated from William Penn College in Iowa in 1922. He did graduate study at Brown University, Hartford Seminary, and Harvard University before finishing his Ph.D. at Johns Hopkins University in Philosophy.
During his career, Trueblood held faculty and chaplain positions at Haverford College, Guilford College, Harvard University, Stanford University, and Earlham College. He was a founder of the Earlham School of Religion, a Quaker seminary in Richmond, and part of a renaissance of American Quaker thought and action spurred on partly by the common experiences of Quaker intellectuals as conscientious objectors during World War II, although Trueblood himself was not a pacifist. He actively sought to mentor younger Quakers into his 90's. Trueblood also founded the Yokefellow movement and supported Stephen Ministries.
He always maintained an internationalist perspective, serving for many years as the permanent representative from the Global Quaker community to the World Council of Churches, an organization he helped bring into being. In the 1950s, Trueblood served as a senior advisor to President Dwight D. Eisenhower, who created a post for him as Director of Religious Information at the U.S. Information Agency. Time magazine profiled him in this role on March 15, 1954. Later, he served as an advisor to President Richard Nixon. He was a political conservative who supported Nixon's foreign policy, including the Vietnam War, and gave the convocation at the 1972 Republican National Convention.
Trueblood died on December 20, 1994 and his obituary was featured in The New York Times.