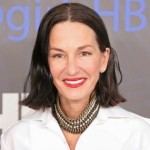 Cynthia Rowley was born in Chicago, Illinois. She is an American fashion designer and writer. She Since then the Cynthia Rowley Collection, incorporated in 1988, has grown to include women's wear, shoes, handbags, eyewear, belts, dishes, legwear, hats, color cosmetics, and fragrance. Rowley introduced menswear in 1998 as well as a women's secondary line, Rowley by Cynthia Rowley, both licensed to Italian sportswear manufacturer Stile Moda SpA. The Council of Fashion Designers of America honored Rowley with a Perry Ellis Award for New Fashion Talent in 1994, after she had been in the business for twelve years, and a nomination for the Perry Ellis Award for New Menswear Design Talent. She has written and co-written several books: Slim: A Fantasy Memoir, The Swell Dressed Party, Swell Holiday and Home Swell Home.