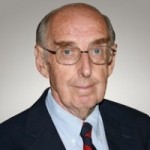 Colman McCarthy is an American journalist, peace activist, professor, writer and pacifist. He wrote columns for The Washington Post. His topics ranged from politics, religion, health, and sports to education, poverty, and peacemaking. Washingtonian magazine called him "the liberal conscience of The Washington Post." He has written for The New Yorker, The Nation, The Progressive, The Atlantic, The New York Times, and Reader's Digest. Since 1999, he has written biweekly columns for National Catholic Reporter. He graduated with a B.S. from Spring Hill College in Mobile, Alabama. In 25 years, he has had more than 7,000 students in his classes. In 1985, he founded the Center for Teaching Peace, a nonprofit that helps schools begin or expand academic programs in Peace studies. In 2010 he was awarded the El-Hibri Peace Education Prize.