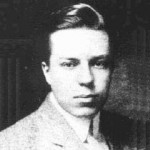 Christopher Morley was born in Bryn Mawr, Pennsylvania. He was an American journalist, novelist, essayist and poet. In 1906 Christopher entered Haverford College, graduating in 1910 as valedictorian. He then went to New College, Oxford, for three years on a Rhodes scholarship, studying modern history. In Oxford a volume of his poems, The Eighth Sin, was published. After graduating from Oxford, Morley began his literary career at Doubleday, working as publicist and publisher's reader. In 1917 he got his start as an editor for Ladies' Home Journal, then as a newspaper reporter and newspaper columnist in Philadelphia for the Philadelphia Evening Public Ledger. Morley's first novel, Parnassus on Wheels, appeared in 1917. The protagonist, traveling bookseller Roger Mifflin, appeared again in his second novel, The Haunted Bookshop in 1919. Author of more than 100 novels, books of essays, and volumes of poetry, Morley is probably best known for his 1939 novel Kitty Foyle, which was made into an Academy Award-winning movie.