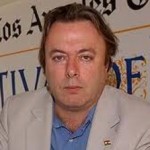 Christopher Eric Hitchens was born in Portsmouth, Hampshire, England. He was a british- American author, essayist, literary critic, screenwriter and journalist. He contributed to New Statesman, The Nation, The Atlantic, London Review of Books, The Times Literary Supplement, Slate and Vanity Fair. Hitchens was the author, co-author, editor and co-editor of over thirty books, including five collections of essays, on a range of subjects, including politics, literature and religion.