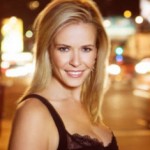 Chelsea Joy Handler was born in Livingston, New Jersey. She is an American comedian, actress, author, talk show host, TV producer, model and activist for gay rights. She hosted a late-night talk show called Chelsea Lately on the E! network from 2007 to 2014, and is currently preparing to host a show on Netflix in 2016. She hosted the first episode of the reality TV show On the Lot, but quit before the second episode aired, saying later that she left, "Because I smelled the disaster happening before it did." Her stand-up comedy has also been televised on VH1's Love Lounge, Comedy Central's Premium Blend, and HBO's broadcast of the Aspen Comedy Festival. On August 18, 2010, it was announced that Handler would be the host of the 2010 MTV Video Music Awards. Her first book, My Horizontal Life: A Collection of One-Night Stands, describes the variety of sexual encounters she has experienced throughout her life.