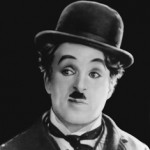 Sir Charles Spencer "Charlie" Chaplin was an English comic actor, comedian, composer and filmmaker. Chaplin became a worldwide icon through his screen persona "the Tramp" and is considered one of the most important figures of the film industry. His career spanned more than 75 years, from childhood in the Victorian era until a year before his death in 1977, and encompassed both adulation and controversy. Chaplin was scouted for the film industry, and began appearing in 1914 for Keystone Studios.  Chaplin directed his films from an early stage, and continued to hone his craft as he moved to the Essanay, Mutual, and First National corporations. By 1918, he was one of the best known figures in the world. Chaplin became increasingly political and his next film, The Great Dictator, satirised Adolf Hitler. Chaplin wrote, directed, produced, edited, starred in, and composed the music for most of his films.