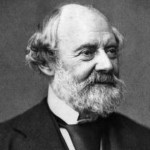 Charles Reade was born at Ipsden, Oxfordshire, England. He was an English novelist and dramatist, best known for The Cloister and the Hearth. He studied at Magdalen College, Oxford, taking his B.A. in 1835, and became a fellow of his college. He was subsequently dean of arts and vice-president, taking his degree of D.C.L. in 1847. Reade began his literary career as a dramatist, and he chose to have "dramatist" stand first in the list of his occupations on his tombstone. His first comedy, The Ladies' Battle, appeared at the Olympic Theatre in May 1851. He made his name as a novelist in 1856, when he published It Is Never Too Late to Mend, a novel written to reform abuses in prison discipline and the treatment of criminals. Five more novels followed in quick succession: The Course of True Love Never Did Run Smooth, White Lies, Jack of all Trades, The Autobiography of a Thief, and Love Me Little, Love Me Long.