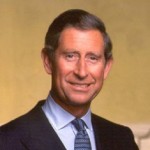 Charles, Prince of Wales was born at Buckingham Palace, London, UK. He is the eldest child and heir apparent of Queen Elizabeth II. He was educated at Cheam and Gordonstoun Schools, which his father, Prince Philip, Duke of Edinburgh, had attended as a child, as well as the Timbertop campus of Geelong Grammar School in Victoria, Australia. After earning a bachelor of arts degree from Trinity College, Cambridge, Charles served in the Royal Navy from 1971 to 1976. He married Lady Diana Spencer in 1981 and they had two sons: Prince William, Duke of Cambridge, and Prince Harry. In 1996, the couple divorced, following well-publicised extra-marital affairs. Diana died in a car crash the following year. In 2005, Charles married Camilla Parker Bowles, who uses the title Duchess of Cornwall.