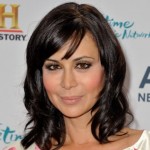 Bell was born in London, England, the daughter of Mina, a personal assistant and nurse, and Peter Bell, an architect. Her mother is Iranian and her father Scottish.
Bell is fluent in Persian and English. She is fond of motorcycling, skiing, snowboarding and kick-boxing, which she has been practicing for over 10 years. Her hobbies include cross-stitching and making model cars, which she has done since age 8. She met actor/production assistant Adam Beason on the set of Death Becomes Her in 1992 (where she was the body-double for Isabella Rossellini), and they were married on May 8, 1994. They have a daughter, Gemma, who was born on April 16, 2003, and a son, Ronan, born on August 21, 2010. The couple separated in October 2011.
Bell was the grand marshal of the NASCAR Nextel Cup Series race at Dover International Speedway on June 3, 2007.
In a survey of 70 celebrities by The Sporting News just before the 2002 Super Bowl, she correctly predicted that the New England Patriots would beat the St. Louis Rams in Super Bowl XXXVI 20 to 17. In actuality the article was written after the NFC and AFC championship games; Bell correctly guessed the score, but the teams were already decided.
In August 2007 Bell and her husband, Adam, put their Calabasas, California, home on the market for $3.25 million, and moved to South Carolina.
During the Hollywood writers strike, Bell took flying lessons in a Cirrus SR22.
When she was in her 20s, she had thyroid cancer and had to have her thyroid removed. She does not cover the scar on her neck because she "thinks it's kind of cool".