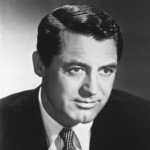 Archibald Alexander Leach was born at 15 Hughenden Road, Horfield, Bristol, England.  An only child, Leach had an unhappy upbringing, attending Bishop Road Primary School. Grant was expelled from the Fairfield Grammar School in Bristol in 1918. After joining the "Bob Pender Stage Troupe", Leach performed as a stilt walker and travelled with the group to the United States in 1920 at the age of 16, on a two-year tour of the country. He was processed at Ellis Island on July 28, 1920.
When the troupe returned to the UK, he decided to stay in the U.S. and continue his stage career. During this time, he became a part of the vaudeville world and toured with Parker, Rand and Leach. Still using his birth name, he performed on the stage at The Muny in St. Louis, Missouri in such shows as Irene (1931); Music in May (1931); Nina Rosa (1931); Rio Rita (1931); Street Singer (1931); The Three Musketeers (1931); and Wonderful Night (1931). Leach's experience on stage as a stilt walker, acrobat, juggler, and mime taught him "phenomenal physical grace and exquisite comic timing" and the value of teamwork, skills which would benefit him in Hollywood. Grant appeared as a leading man opposite Marlene Dietrich in Blonde Venus (1932), and his stardom was given a further boost by Mae West when she chose him for her leading man in two of her most successful films, She Done Him Wrong and I'm No Angel (both 1933).
The Awful Truth (1937) was a pivotal film in Grant's career, establishing for him a screen persona as a sophisticated light comedy leading man. Grant appeared in the Hitchcock classics Notorious (1946), To Catch a Thief (1955) and North by Northwest (1959). Biographer Patrick McGilligan wrote that, in 1965, Hitchcock asked Grant to star in Torn Curtain (1966), only to learn that Grant had decided to retire after making one more film, Walk, Don't Run (1966); Paul Newman was cast instead, opposite Julie Andrews.
Grant was preparing for a performance at the Adler Theater in Davenport, Iowa on the afternoon of November 29, 1986 when he sustained a cerebral hemorrhage. He died at 11:22 pm in St. Luke's Hospital at the age of 82.