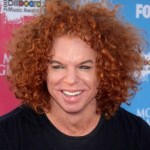 Carrot Top was born in Rockledge, Florida. He is an American stand-up comedian, actor, director, producer, writer, singer, and comedian, best known for his bright red hair, prop comedy, and self-deprecating humor. He graduated from Cocoa High School in 1983 and enrolled at Florida Atlantic University in Boca Raton later that year. He has appeared in Larry the Cable Guy's Christmas Spectacular, Gene Simmons Family Jewels, Space Ghost Coast to Coast, Criss Angel Mindfreak, Scrubs, George Lopez, and Tugger: The Jeep 4x4 Who Wanted to Fly. From 1995 to 1999, Carrot Top was the continuity announcer for Cartoon Network, for which he also produced and starred in an early morning show called Carrot Top's AM Mayhem for two years. He has appeared on numerous nighttime television talk shows. In 1996, he appeared on the animated/live action Cartoon Network talk show Space Ghost Coast to Coast.