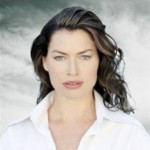 Carre Otis was born in San Francisco and raised in Marin County, California. She is an American model and actress. She first achieved fame while working for Elite in Paris, when she appeared on the cover of French Elle in April 1986. Over the next several years, she appeared on covers in the American and foreign editions of Vogue, Harper's Bazaar, Cosmopolitan, Allure, Mirabella, and Marie Claire. She appeared in ads for Guess jeans, Calvin Klein jeans, the 1996 Pirelli calendar, and also posed for the Sports Illustrated swimsuit edition. She was also featured in 1990 and 2000 issues of Playboy magazine. In 2005, she represented the Breil jewelry line. In 1990, Otis made her acting debut in the film Wild Orchid. She would later appear in another Rourke film, Exit in Red. Her book, Beauty, Disrupted: A Memoir was released in October 2011.