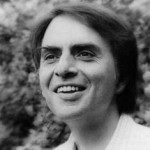 Carl Sagan was born in Brooklyn, New York. He was an American astronomer, cosmologist, astrophysicist, astrobiologist, writer and planetary scientist. His contributions were central to the discovery of the high surface temperatures of Venus. However, he is best known for his contributions to the scientific research of extraterrestrial life, including experimental demonstration of the production of amino acids from basic chemicals by radiation. He received a B.A. degree in 1954, a B.S. degree in physics in 1955, and an M.S. degree in physics in 1956, before earning a Ph.D. degree in 1960 with the dissertation "Physical Studies of Planets" submitted to the Department of Astronomy and Astrophysics. He published more than 600 scientific papers and articles and was author, co-author or editor of more than 20 books. He also wrote the science fiction novel Contact, the basis for a 1997 film of the same name. Sagan and his works received numerous awards and honors, including the NASA Distinguished Public Service Medal, the National Academy of Sciences Public Welfare Medal, the Pulitzer Prize for General Non-Fiction for his book The Dragons of Eden, and, regarding Cosmos: A Personal Voyage, two Emmy Awards, the Peabody Award and the Hugo Award.