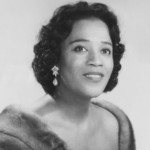 On October 18, 1919, Camilla Ella Williams was born in Danville, Virginia, to Fannie Carey Williams and Cornelius Booker Williams, who worked as a chauffeur. By the age of eight, Camilla was dancing, playing the piano, and singing at school and Danville's Calvary Baptist Church. Williams trained at Virginia State College . After earning a B.S. there, she studied privately in New York, eventually with the great teacher Marion Szekely Freschl. She earned a Marian Anderson Fellowship in 1943 and again in 1944. She continued to receive honors in vocal competitions.
Beginning in 1944, Williams performed on the coast-to-coast RCA radio network. In 1946 she was the first African American to receive a regular contract with a major American opera company, making her debut with the New York City Opera in the title role in Puccini's Madama Butterfly. Her performance was hailed by the New York Times critic as "an instant and pronounced success." During the next six years, she performed Nedda in Leoncavallo's Pagliacci, Mimi in Puccini's La bohème, and the title role in Verdi's Aida.
Williams sang throughout the United States and Europe with various other opera companies. In 1951 she sang Bess in the landmark, first complete recording of Gershwin's Porgy and Bess. In 1954 she became the first African American to sing a major role with the Vienna State Opera, and performed her signature role in Madama Butterfly. In 1963, as part of the civil rights March on Washington, she sang "The Star-Spangled Banner" at the White House. In addition, she was a soloist with the Royal Philharmonic, BBC Symphony, Berlin Philharmonic, Vienna Symphony, Chicago Symphony, Philadelphia Orchestra and the New York Philharmonic under the direction of Leopold Stokowski. In 1950 she recorded Mahler's Symphony No. 8 with Stokowski and the New York Philharmonic.
From 2000 to 2011, she lived in companionship with her accompanist Boris Bazala, from Bulgaria.