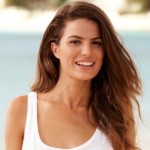 Cameron Russell was born in Boston, Massachusetts. She is an American fashion model. She displayed an interest in politics at an early age. Since beginning her modeling career part-time at the age of 16, Russell has worked with numerous successful photographers including Steven Meisel, Craig McDean, and Nick Knight among others, in such magazines as American, French, Italian, Spanish, German and Japanese Vogue, W, Self Service and Numéro. She has featured in runway fashion shows for designers including Chanel, Louis Vuitton, Prada, Dolce & Gabbana, Marc Jacobs, Versace, Vivienne Westwood, Ralph Lauren, Victoria's Secret, and Diane von Fürstenberg.