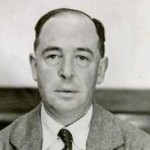 Clive Staples Lewis was born in Belfast, Ireland. He was an Irish novelist, poet, literary critic, essayist, broadcaster and scholar. He held academic positions at both Oxford University and Cambridge University. He is best known for his fictional work, especially The Screwtape Letters, The Chronicles of Narnia, and The Space Trilogy, and for his non-fiction Christian apologetics, such as Mere Christianity, Miracles, and The Problem of Pain. Lewis's works have been translated into more than 30 languages and have sold millions of copies. The books that make up The Chronicles of Narnia have sold the most and have been popularised on stage, TV, radio, and cinema. In 2013, on the 50th anniversary of his death, Lewis was honoured with a memorial in Poets' Corner in Westminster Abbey.